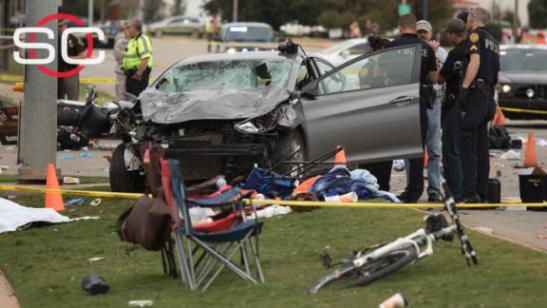 The horrible crash at Oklahoma State University yesterday has claimed the life of another victim, this one a two-year-old child. Four more parade-goers remain critical and a dozen or so are in serious condition.

I know this is Golf Weekend, but we haven’t heard President Obama call for sweeping new legislationso we can keep automobiles out of the hands of people who shouldn’t have them.

Maybe Air Force One is being fueled, like it was before the cordite cleared the air in Aurora and Charleston and UCC. Or am I being too quick to politicize this?

I may have missed it but I haven’t seen a Washington Post op-ed this morning blaming white Americans for senseless traffic deaths.

Could it be that our liberal moral and ethical betters haven’t noticed that there are an average 35,000 automobile deaths annually, roughly the same number as firearms deaths? Or that…